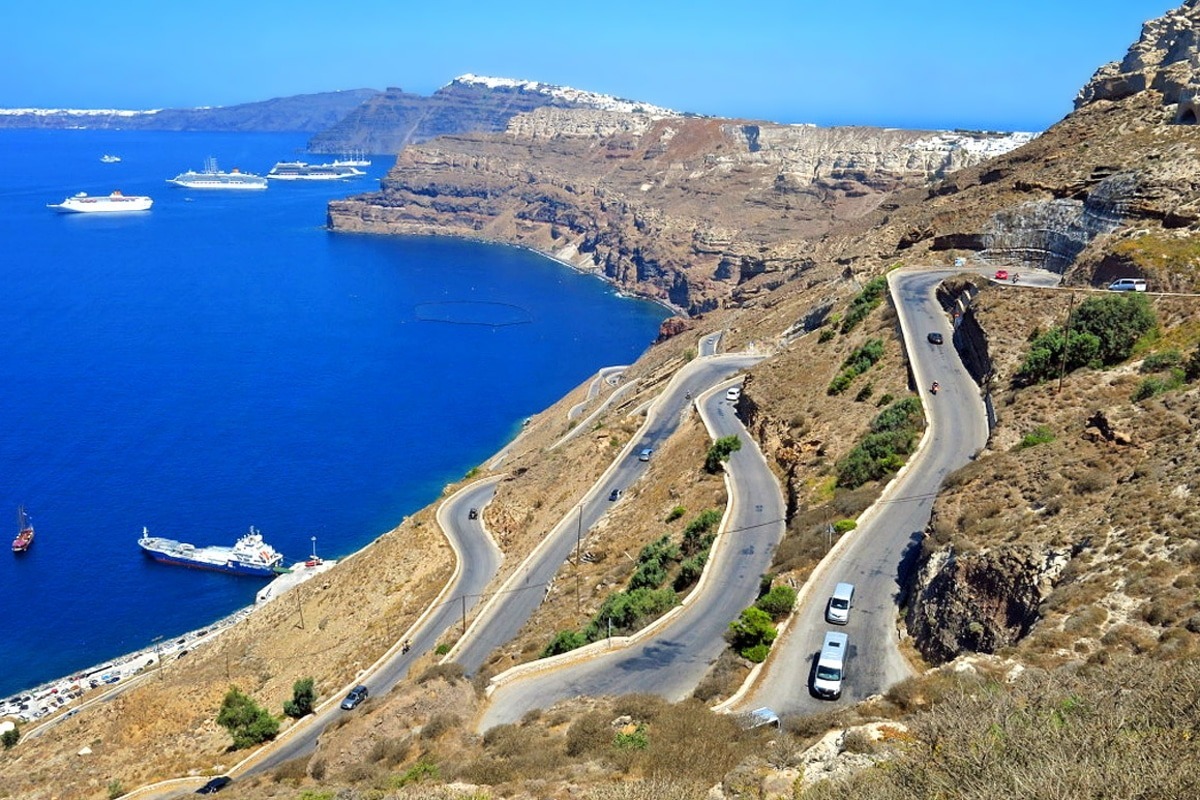 Before renting a car, every traveler always thinks about what roads he will have to travel and what to expect from them. For Greece, there is no need to worry too much: the roads are good here.

All municipal roads in Greece are free of charge. Only a few major highways are toll. This means that you do not need to buy a vignette or to pay for something extra.

Most of the roads in Greece are good. Even in countryside, most of them are in good condition. Although sometimes exceptions may happen. You should also have in mind that they are narrow, and you will not speed much on them. The unpaved roads can be found in very remote or unimportant areas, but you can drive there by any passenger car.

You should always consider the local features, because Greece is a big country. For example, 80% of the country's territory is occupied by mountains, so most of the roads go through mountainous areas, and steep serpentines are common there. You will see especially many of them on the islands. Besides, there are many unlit, mountainous and unpaved road sections on the Greek islands. The Halkidiki Peninsula though doesn’t have many difficult areas.

Ferry service is well developed in Greece that is why in summer auto travelers from all over Europe come here. But it is important to remember that usually the car insurance is not valid on ferries.

Greek toll roads are large highways, where you usually pay only for the sections that you pass. All the highways are well organized, have excellent pavement and are illuminated at night. Using highways for passenger cars costs from €0.45 to €4 on average. Tollgates are mainly located at the entrances and in front of each new section.

Greece has a ramified system of 8 toll highways. They significantly reduce travel time to almost any part of the country, but there are always free alternatives to them.

The longest highway, which is 670 km long, runs along the northern border of the country, 70 kilometres away. It connects Alexandroupolis on the border of Turkey and Igoumenitsa that is located near Albania. It is one of the main highways of the country. There are 9 toll sections on the route, which cost from €1.20 to €2.40. Thus, passage along the entire route for a passenger car will cost about €17.4.

It connects Thessaloniki and Lamia. There are 10-12 payment points (depending on the driving direction) with a cost from €0.70 to €3.20 for driving on the section. So a journey from Thessaloniki to Athens along the Aegean and Pathe highways will cost about €38.2 and will take about 5 hours (about 500 km). At the same time, the travel on freeways will take more than 8 hours.

The 205 km long highway runs through the center of the Peloponnese Peninsula, connecting the cities of Corinth, Tripoli and Kalamata. There is also a paid section to Sparta. There are 6 payment points on the road that cost from €1.25 to €2.90.

The highway, which is 210 km long, connects the cities of Athens and Patras. One of the most picturesque routes with good views of the Gulf of Corinth. There are 5 main toll points on the highway, as well as toll gates at entrances and exits from it. Passing through the sections costs from €1.8 to €3.30.

Connects the cities of Ioannina and Antirrio. The length of the road is 196 km. The fee is charged by 4 toll points on the highway and 5 ones on the exits from it. Passage costs from €0.75 to €3.55.

It is almost a ring road around Athens. It connects Athens airport and the Olympia and Pathe highways. Here the fare is paid only once, at the entrance. For a passenger car, the toll rate will be €2.8.

Toll road from Lamia to Trikala

The toll section runs from Trikala to the town of Agios Stefanos. It has 2 toll gates, which cost €1.95 and €3. There are also two toll sections outside the highways. They are the tunnel Preveza — Aktio and the bridge Rio — Antirrio (Patras).

This is the only Greek underwater tunnel. It connects Cape Aktio and the city of Preveza. Its length is 1.5 km, and the toll rate is €3.

It is the longest cable-stayed six-lane bridge in Europe, which is almost 3 km long. It is a magnificent sight. It connects mainland Greece and the Peloponnese Peninsula. The cost of car passage is €13.3 and the payment point is located in Antirrio.

The roads on the islands are worse than on the mainland. This is because of the fact that it is much more expensive and difficult to repair and build them. Here ground and narrow road sections occur very often, and there is a lot of serpentine.

Driving along island roads requires accuracy and attention. In particular, you should always maintain a distance from the car in front of you, so that a stone does not rebound from it.

Peculiarities of the Greek traffic rules

Basically, the rules in Greece are the same as in Europe:

The similarity in traffic rules is complemented by some national driving characteristics. The Greeks are not very disciplined, often skip traffic priority signs, do not use turn signals, run at the first seconds of a prohibiting traffic light signal, often park cars chaotically. And, of course, they do not stick to speed limits. But on the roads, mutual respect is accepted, so drivers often yield and give a way, regardless of the rules. Especially if they recognize a foreigner at the driver’s seat.

Besides, on the Greek roads, an unspoken rule is adopted: those who drive slowly should keep as close to the edge of the road as possible, allowing more hurried drivers to pass. It is normal to drive one wheel on the road border. Or right on it, if the road border is wide.

You can meet the police, but not often. They don't make secrets out of their presence, but they try not to show up too much. The police are patient to tourists and try not to disturb them unless necessary. But if after all it comes to a fine, you can ask the inspector for indulgence. Or, to put it simply, try to “swing him round”. If you are lucky, the amount of the fine will decrease. But never be rude with a police officer.

Parking in cities is difficult. Especially in large ones. You can leave the car if there are no banning signs and yellow markings (and in Athens, also blue ones). Blue markings mean the paid parking zone, white markings are used for free areas.

In Athens, the system is different: blue markings mean parking is possible only for residents, white ones indicate paid parking for guests of the city at a cost of €1 per hour.

But there are many paid parking lots in cities, so it is always possible to find a place for a car.

So is it difficult to drive in Greece?

Greece is a beautiful and hospitable country with good, convenient roads that are a pleasure to drive along. The main thing is to follow the rules of the road, be careful and comply with the terms of the car rental agreement.

On the Aktis Car booking service, you can always compare the conditions of rental companies and choose the most profitable kind for yourself. You can also book a specific car model with full insurance and delivery, prepaying only 20% of the booking price.

The most important thing is to travel with pleasure and joy. In a country where it is customary to shoot at road signs at a wedding, kind and hospitable people live!